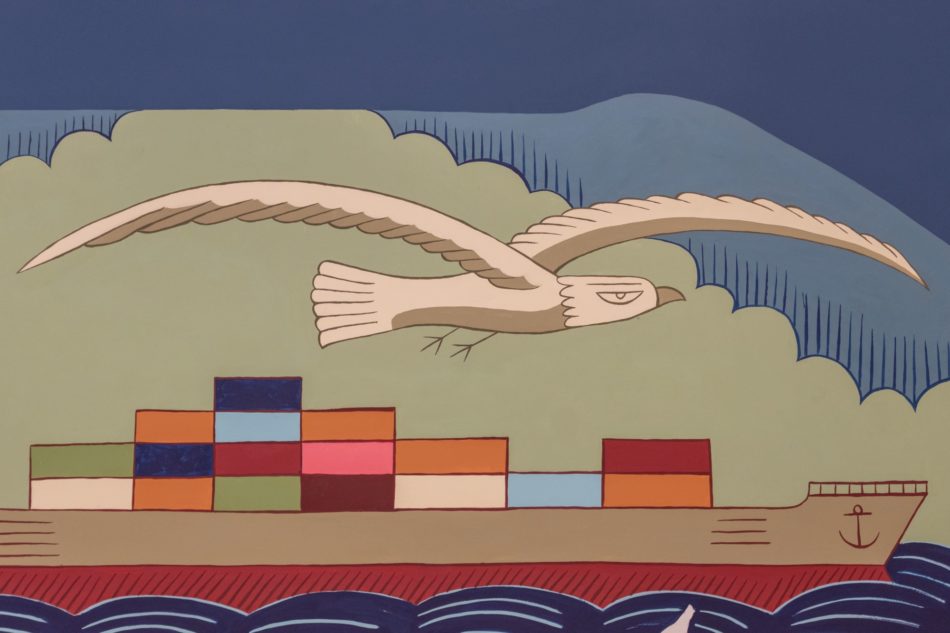 Open at all times

See the schedule for island hours.

See Not for Nutten on view in the historic Battery Maritime Building beginning May 1, 2021, and read more about the work below.

Although no one knows whose hand constructed the world’s first ship in a bottle, the delicate miniatures capturing frozen nautical scenes became popular in the 18th and early 19th centuries. In his large work for the Governors Island Ferry Building, Duke Riley expands on the tradition of these preciously crafted objects by using a more common bottle of today - single use plastic containers found floating in oceans worldwide. Unlike their blown glass and wood counterparts, Riley’s painted vignettes appear etched like scrimshaw on the surfaces of items that plague our waterway ecosystems such as detergent bottles and caulking tubes.These towering scenes act as snapshots of time and tale, forming a bridge from past to present, fact and fantasy. Riley’s richly pigmented mural provides visitors an introduction to their journey across New York Harbor to Governors Island, reflecting on how storytelling, memory, and human consumption all make imprints into our ever-evolving understanding of place, history, and the physical landscapes that we inhabit.

Duke Riley anchors his work, Not for Nutten, in location with nautical flags spelling out Pagganuck (“Nut Island”), the name given to this place by its first occupants, the Lenni-Lenape, after the Island’s many hickory, oak, and chestnut trees. In 1624, Dutch settlers translated the Island’s name to Noten Eylandt, which the British later referred to as Nutten Island, a mispronunciation of the Dutch name. Riley’s play of the term “not for nothing”, a phrase whose origin is speculated to be uniquely from New York City, frames the reading of the mural and its environmental warning - emphasizing important news about to be delivered.

On the vast back wall, scenes range from Island’s British occupation to today. A soda bottle references an early 18th century likeness of Island residentLord Cornbury, governor of New York and New Jersey from 1701-1708, depicted in the attire which he was rumored to adorn in both private and public. To the far right, an oil bottle contains the image of a mercreature operating the world’s first submarine, The Turtle, used by Washington’s army to secure explosives to British war ships in New York Harbor in 1776. A deodorant tube holds the gloves of iconic world heavyweight boxing champion Joe Louis, who appeared for hisArmy physical at Fort Jay in 1942. Overlapping time narratives lead us to more recent images of the Island’s former Coast Guard lighthouse in a dishwashing bottle, a narwhal caught in a covid-era rubber glove, and contemporary container ship bringing goods past the Island in and out of Red Hook, most certainly carrying new single use items to be discarded in our harbor - “Easy Come, Easy Go.”

Duke Riley is a Brooklyn-based artist and seafarer, whose work is intertwined with maritime history and urban waterways. His installations, paintings, drawings, sculptures, and mosaics weave historical and contemporary events with elements of fiction and myth. In 2007, Riley built, launched, and piloted a full-scale replica of the Turtle, reenacting its 1776 mission near the shores of Governors Island in the Buttermilk Channel for his project The Battle of Brooklyn. Born in Boston, Riley received his BFA from the Rhode Island School of Design and his M.F.A. from Pratt Institute. Riley’s work has been widely exhibited in shows and public projects in New York, nationally, and internationally.

Not for Nutten was Commissioned by the Trust for Governors Island and was made possible through the generous support of Charina Endowment Fund and The O’Grady Foundation.

Open at all times

See the schedule for island hours.