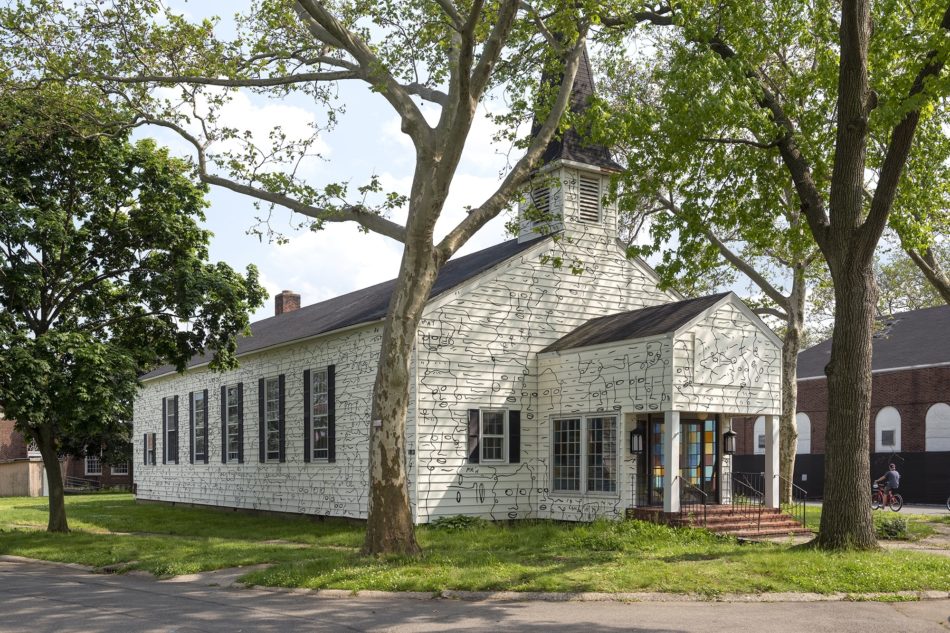 South Battery - Our Lady Star of the Sea

Visitors must wear face coverings and maintain social distancing between groups at all times inside The May Room.


Capacity is limited to 25 visitors inside The May Room at one time. Visitors are asked to limit their time in The May Room while others are waiting.

The May Room’s accompanying exterior work, Church, is on view at all times.

Bringing new life to Our Lady Star of the Sea, Martin uses her signature black and white drawings to create a living, visible beacon in the Island’s Historic District. Inspired by her personal experiences and research on the vibrant history of the Island, the exterior invites visitors to circumnavigate the former chapel’s architecture through image and narrative, engaging with the dynamism of the landscapes that surround it. In this way, the work serves to highlight and help re-imagine a building that has long been empty and closed to the public. Reflecting upon the building’s history, Martin’s large-scale drawing pays tribute to the disused former military structure and honors its legacy as a place of great significance on the Island during its half-century of active use.

With the interior, Shantell Martin creates a labyrinthine installation spanning the floors and walls of the building that act as a place of both quiet reprieve and shared discussion. To expand on her monumental work Church, which transformed the façade of Our Lady Star of the Sea, Martin now reimagines the interior of this former chapel built in 1942 with her signature black-and-white line drawings. Custom-built furniture in the shape of letters that can be arranged to spell out words will dot the floor of the space, allowing visitors to move and interact with the work. The building’s nave, which has been closed to the public since 1996, will be restored as part of Martin’s project.

Built in 1942, Our Lady Star of the Sea originally opened as a Catholic chapel during the Second World War and the expansion of the former U.S. Army base. Serving as a central hub of religious activity on the Island along with nearby St. Cornelius Chapel, Our Lady Star of the Sea remained in use until 1996 when the U.S. Coast Guard ceased operations on Governors Island. Deconsecrated for over 20 years, the former chapel is one of the few non-landmarked buildings located within the Governors Island Historic District. Martin’s project brings new life and visibility to the former chapel for the first time in years.

Getting to South Battery

South Battery - Our Lady Star of the Sea