The City of New York established The Trust for Governors Island as a nonprofit organization and instrumentality of the City of New York, charged with managing the Island’s ongoing operations, planning and development. The Trust owns 150 acres of the island and has a contract with the City to operate and redevelop it. Tenants execute short, medium, or long-term leases. As landlord, the Trust owns and manages the island’s properties and facilitates or directly provides certain island-wide services.

The remaining 22 acres of the Island are owned and managed by the National Park Service as the Governors Island National Monument. For more information on NPS properties, please visit nps.gov/gois.

For nearly two centuries, Governors Island was closed to the public, operating as a military installation. Thanks to over a decade of advocacy, planning and city investment, the Island is now a unique and beloved public destination, open to the public between May-October with plans for expanded educational, non-profit and commercial tenancies. 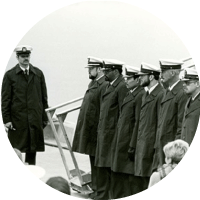 After nearly 2 centuries as a military installation, US Coast Guard departs Governors Island. 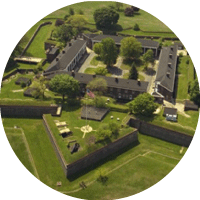 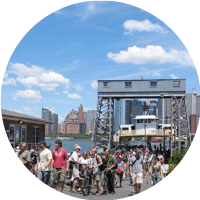 Return to the People of New York

The federal government sells the remaining 150 acres of Governors Island to the people of the City and State of New York for a nominal cost. Provisions in the deed ensured that much of the Island would be used for public benefit. The Island later welcomed its first visitors in 2005. 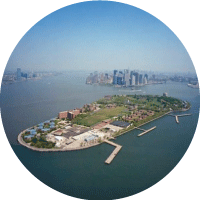 The State of New York transfers 150 acres of Governors Island to full City control, beginning a decade of nearly $400M in investment, including a new park and infrastructure upgrades. The Trust for Governors Island is founded as the entity responsible for the Island’s ongoing planning, operations and development. 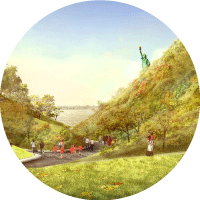 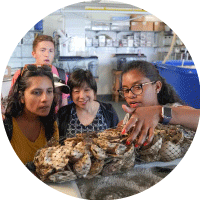 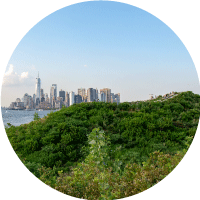 With the opening of the Hills on Governors Island, the crowning achievement of the new park, 43 acres of open space were complete for New Yorkers to enjoy. 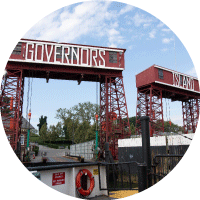 The Island's Next Chapter

With the park now complete, the Island is poised for growth as a year-round public place, with new educational, cultural and commercial facilities anchored by a center for climate solutions.

When the federal government transferred the island to local control, it established a set of required, permitted, and prohibited use covenants for Island properties, as well as historic preservation covenants for the historic district. The deed also includes a provision that all revenues generated on-Island shall be applied to Governors Island. These covenants guide and control development on the island and can only be altered with the agreement of the United States Department of the Interior.

90+ acres for public benefit, including:

In 1985, 93 acres of the Island’s 172 acres was declared a National Historic Landmark District. A slightly smaller district was recognized by New York City’s Landmarks Preservation Commission in 1996, a designation that added even greater protection to Governors Island’s stately homes and landscaped grounds.